We’ve talked about one major class of infectious agents: bacteria. Let’s look at the other major class: viruses.

What is a virus?
A virus is a piece of genetic material wrapped in a protein coat: essentially an instruction sheet inside a box. We’re not really sure if viruses are alive. They reproduce and evolve like life, but they don’t have cells, metabolism, and don’t react to being poked, as all other lifeforms do. They also can’t reproduce without the help of a living cell. Have a handful of scientists debate this idea at your next dinner party – it’ll be fun.

If sneakiness were a qualification for life, viruses would definitely make the cut. Viruses appear on the outside of a cell wrapped up very nicely, like a Christmas present or a wooden horse. The cell naively brings the virus inside and opens the package. Inside, the cell finds a sheet of instructions written in the cell’s own language. ((All life shares the same basic code. The four molecules that make up the instructions on our DNA (A, T, C, and G) make up 3-letter codes that every cell translates to the same amino acids. For example, when any cell sees the sequence TGG, it adds a tryptophan molecule. Every cell! From the bacteria living in the dirt to the plants growing in it to the person eating the plants. It’s a universal language.))

Those instructions are the easiest chain letter ever: “Copy me, and put me in a new box.” The cell (we’ll call him Bob) naively trusts gift-giver and follows the instructions. Bob uses his own resources to make new copies of the instructions and new, fancy boxes. He goes into overdrive, producing thousands of new viruses, and the stress eventually kills him. Bob wasn’t familiar with his Virgil – Never trust a Greek bearing gifts.

The new viruses go out to infect other cells who also haven’t studied their Virgil, and the process continues.

Influenza Virus
Interestingly, while there are many beneficial or non-harmful bacteria, most viruses cause illness in some lifeforms (from bacteria to animals). Let’s look at a particular example – the flu – to see how viruses make humans sick.

The flu virus infects cells lining your respiratory tract – nose, throat, and lungs. To do so, the virus changes part of its wrapping – a hemagglutin protein – to trick human cells into taking it in. Our cells see new wrapping paper and think that, this time, it must be a real present.

The neuraminidase protein helps the newly packaged virus escape a cell once it’s been properly packaged.

Variations in these two proteins allow the flu virus to continue tricking human cells into taking the virus in, copying it, and releasing it. The large levels of replication eventually kill the cell and can cause sheets of tissue to peel off. In the respiratory tract, flu kills many of the cells with cilia, which help propel mucus up and out of the respiratory tract. This killing of cells, combined with the body’s response to infection, causes most of the symptoms of flu.

How Jill Fights the Flu
Once again, our intrepid hero Jill is sick. 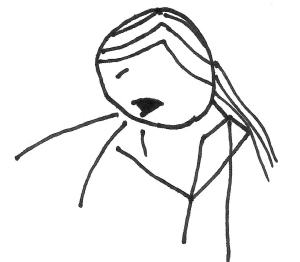 The flu virus has invaded her body and is busy making copies.

Fortunately, some of Jill’s cells have gone to school. Special white blood cells (lymphocytes) go to school in either the bone marrow (B-cells) or thymus ((an organ in your breastbone)) (T-cells). B-cells go to school to learn how to make antibodies against things like invading wooden horses, or the flu virus ((antibodies are introduced in Hives)).

There are 1,000,000,000 types of B-cells in Jill’s body, each able to recognize one specific molecule. If Jill is lucky, one of her B-cells happens to recognize the type of flu she’s infected with. When a B-cell binds to a flu particle, it sounds the alarm and starts producing a ton of antibodies. These antibodies bind very specifically to a flu particle. Some of them bind to the hemagglutin protein on the flu – without this protein, the flu virus can’t get inside a cell. The B-cells have found a way to stop further infection!

Meanwhile, the T-cells are working. T-cells went to school in the thymus. Some of them became cytotoxic (“cell-killing”) T-cells. Their job is to find cells of Jill’s that have already been infected and to destroy the cells before they release more virus. It’s like recognizing Troy had been invaded and burning the city before the Greeks could escape.

How the Battle Causes Flu’s Symptoms

Most of the symptoms we associate with flu are caused by your body’s reaction to the virus. Let’s look at a few example symptoms in Jill’s illness: cough, sore throat, and snot.

The flu virus causes damage to the skin lining Jill’s airway. It copies itself inside these cells, and many of them die. Her body has sent fighter B-cells and T-cells to the scene, and they release a host of chemicals to start the inflammation process. Now, coughing is controlled by the vagus nerve, a big nerve running down the throat and into the heart that’s in charge of a whole lot of important things (like controlling our heart rate). That nerve can get inflamed and is hyper-reactive during the early stages of flu. It tells the body to cough even when there’s nothing to cough up. That gives Jill the unproductive, sleep-depriving cough of early infection. Later, Jill’s lower airway fills up with inflammatory chemicals, dead cells, and mucus. The vagus nerve then correctly responds and helps Jill cough up the junk.

Jill’s aching sore throat is also thanks to the inflammatory process that’s bringing her soldiers to fight the flu. Certain inflammatory chemicals act on nerve endings in Jill’s throat, causing them to cry “PAIN!” to her brain.

Snot. Phlegm. Mucus. Boogers. The stuff we love to hate when we’re sick. In health, mucus helps protect us from infection and warms and moistens the air. So where does all the extra mucus come from during a bout with the flu? Mucus-producing cells for the sticky part and blood vessels for the runny part. Initially, the irritation caused by the virus tells the mucus cells to up production to help clear the virus. Once the inflammatory response sets in, blood vessels dilate and become leakier to bring fighting cells to the area. That leakiness also lets plasma (mostly water) mix with the mucus, giving Jill a runny nose. ((The color of your nasal mucus roughly corresponds to the number of white blood cells in it. When white blood cells are fighting, they release an enzyme that’s greenish-yellow. Clear mucus has few white blood cells in it, yellow mucus has some, and green mucus has a lot.))

Congestion is also due to the inflammatory response. Large veins in Jill’s nose swell (again, to help bring defenders to the right place), but they sometimes swell so much that they block airflow. (You might be noticing a pattern – the inflammatory response tends to cause a lot of damage or side effects as it tries to protect Jill. It’s a tradeoff.)

The other symptoms of flu (fever, chills, headache, body ache) are big-picture reactions to the inflammatory process in Jill’s airway. The pathways are complex and not all that interesting, so we’ll skip them here.

Eventually, Jill’s fighting B-cells and T-cells defeat the virus by surrounding it with antibodies or killing Jill’s cells that the virus has infected. The white blood cells will stop telling Jill’s respiratory tract to stay inflamed, so her nose, throat, and lungs will begin to return to normal. Her body will start replacing the tissues that the flu destroyed.

A few of the war veteran B-cells and T-cells become memory cells. They hang out in the body, talking about the old days. If the same virus comes back again, they help Jill mount a faster defense.

Because viruses sneak in and use our own cells to reproduce, they’re much harder to kill than bacteria are. There are a few anti-viral drugs, but our biggest weapon against viruses is vaccination.

Why, then, do you have to get a flu shot every year? Because the flu virus changes so fast that, often, each year’s flu looks like a completely new virus.

Our cells have a ton of machinery to make sure that every time they copy themselves, they’re doing a good job. The flu virus – just instructions in a box – has no such machinery. Without error checking, copying a virus’s instructions results in about 1 error for every 10,000 bases: that translates to one change every time the flu replicates. Even during one person’s sickness, that’s a lot of changes! Not all of these changes are good, so those viruses don’t survive to replicate in another cell. Some, though, do survive.

Scientists name flu strains by the variations they have in their two major proteins: hemagglutin (H) and neuraminidase (N). So, the H1N1 flu that you hear so much about has variation 1 of hemagglutin and variation 1 of neuraminidase. Variations in these two proteins can help the virus enormously: H mutations to trick cells into letting the virus in, and N mutations to help all the baby viruses escape.
We can make good guesses about which variations of the flu will be most “popular” each flu season, and parts of those viruses go into the flu vaccine. However, if our guesses are wrong, even people who have gotten the flu vaccine can still get sick.
Scientists are working on better vaccines that will protect us from all flu viruses, but they still have a long way to go.

Be sure to leave requests for future posts in the comments!  Like our Facebook page for neat health and disease-related news stories, comics, etc.

Kid’s introduction to viruses from the University College Cork.

Get the flu without the misery:

Virgil’s Aeneid in e-book format. The Trojan horse story is in Book II.

One thought on “Flu – Virus in a Wooden Horse”